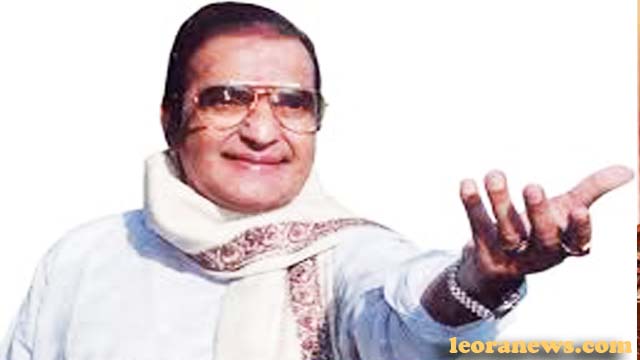 Nandamuri Taraka Rama Rao (May 28, 1923 – January 18, 1996), known as the NTR, was an Indian actor, producer, director, director, and politician who had served as chief minister for seven years for three terms. He is widely regarded as one of the best actors in Indian cinema. N.T. Rama Rao has received three national film awards for its co-productions with Thodu Dongalu (1954) and Seetharama Kalyanam (1960) under the National Art Theater of Madras and for the realization of Varakatnam (1970). NTR received the former Rashtrapati Awards for his performances in the films Raju Peda (1954) and Lava Kusa (1963). He won the Nandi Award for Best Actor for Kodalu Diddina Kapuram in 1970 and the inaugural Filmfare Award for Best Actor – Telugu in 1972 for Badi Panthulu.

In May 1943, at the age of 20, while pursuing his intermediary, NTR married Basava Rama Tarakam, daughter of his maternal uncle. The couple had eight sons and four daughters.

His eldest son, Nandamuri Ramakrishna Sr., died in 1962, shortly after NTR completed the filming of Irugu Porugu. NTR founded the Ramakrishna Studios movie studio in Nacharam. His fourth son, Nandamuri Harikrishna, who died in a tragic car accident on August 29, 2018, was a child actor turned politician elected to the Rajya Sabha and representing the TDP. Harikrishna’s sons, Nandamuri Kalyan Ram and Jr. NTR, are also actors in the Telugu film industry (Tollywood), the latter being one of the major players in the industry today. His sixth son, Nandamuri Balakrishna, has been one of Tollywood’s leading actors since the mid-1980s. He also began his career as a child artist. Balakrishna challenged the 2014 assembly elections as a TDP candidate. He won the constituency of the Hindupur Assembly. His seventh son, Nandamuri Ramakrishna Jr. is a film producer. His third son, theater owner Nandamuri Saikrishna, died in 2004 as a result of diabetes-related complications. The other sons Jayakrishna and Mohanakrishna are well-known filmmakers. Taraka Ratna, the son of Mohanakrishna, is also a Tollywood actor.

NTR’s second daughter, Daggubati Purandeswari, represented the Indian National Congress at Lok Sabha and was a minister of the Union. She changed allegiance to the Bharatiya Janata party.

Basava Tarakam died of cancer in 1985. In her memory, NTR founded the Basavatarakam Indo-American Cancer Hospital in Hyderabad in 1986. In 1993, NTR married Lakshmi Parvathi, a Telugu writer. She is the author of her two-volume biography of NTR, published in 2004. The first volume, “Eduruleni Manishi”, deals with her childhood as she enters the movies. The second volume, “Telugu Tejam”, deals with his political career.

After his film career, NTR entered politics. He founded the Telugu Desam Party (TDP) in 1982 and served three tumultuous terms as Chief Minister of Andhra Pradesh from 1983 to 1995. He was known for defending the distinct cultural identity of Andhra Pradesh , distinguishing him from the former state of Madras with which he was was often associated. At the national level, he played a key role in forming the National Front, a coalition of non-Congress parties that ruled India from 1989 to 1990.

NTR died of a heart attack on January 18, 1996 at his home in Hyderabad at the age of 72. He was cremated and his ashes were immersed in Srirangapatna by his second wife eight years later, in 2004.